Crime and the Forces of Evil Offers a Dreary Sentence 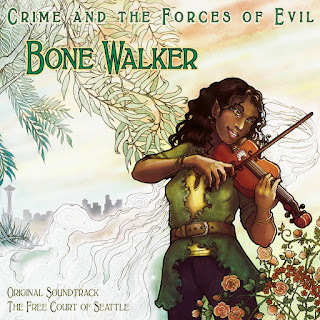 We like it when ambitious projects come our way. And when the nook-hidden fantasy indie group Crime and the Forces of Evil offered their latest project for review, we didn’t want to decline. Bone Walker is a soundtrack to a fantasy book series by the name of The Free Court of Seattle, the city from whence these Newfoundland folk (self-described) elves come. Usually what happens with these kind of ambitious projects is we complain about overreaching scope (17 Pygmies’ Even Celestina…); muddled storytelling (The Decemberists’ Hazards of Love), or just crazy, crazy ambition. But that’s not what we’re faulting Bone Walker with here. It’s much simpler than that.

What’s missing with Bone Walker? Musical experience. The musicians here are capable, yes, but they lack the kind of experience that gives power to a performance, that makes music memory. We even have to say the lead vocalist’s voice doesn’t capture, but rather irks us; it lacks emotive strength, it’s incapable of closing the distance between musical sounds and storytelling.

The album itself is composed of three parts: instrumental tracks, lyrical folk tracks (verse, chorus, etc.) and excerpts from the fantasy series. These parts are interchanged together well enough, but certainly not gracefully; there is a clear distinction between each of these, when we feel there are certainly ways to weave the material of the fantasy series a bit more gracefully to music. Furthermore, the instrumental folk parts feel rigid and stale; what we were hoping for was fire, unmitigated fire being restrained by the tempo, restrained the limits of musical expression. What we got instead are typical instrumental breaks followed by breaks for novel excerpts followed by a handful of songs. So about 2/3 fluff, in a sense.

Our lone highlight here is “A Lullaby for John Barbour,” the extra given on the album. The simple guitar and singer arrangement fits best with the color of the vocalist’s voice, and it comes off sincere, not forced. But yet, for the price, we have only one verdict for Crime and the Forces of Evil: take a pass.

Stream the album from their Bandcamp page.