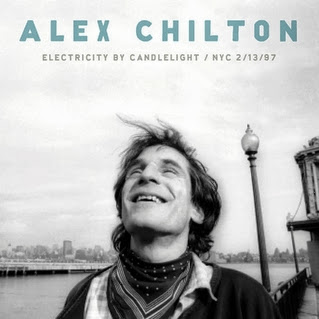 It’s a cold February night in NYC. Across from you is a legendary Memphis musician, reformed drug addict, and born-again folk singer. The lights go out – there is no electricity – and now it’s you and him, back and forth, the both of you trying to discover “that perfect folk song” to round out the night. This is not perfect, this is not mastered beautifully, and it’s not always the easiest to listen to. The audience and various noises overtake Chilton much of the time. What this is is one of those rare intimate moments caught on tape with Big Star’s former frontman playing off the audience, taking requests, just generally enjoying himself. It is for fans of Chilton and Big Star, and here we suspect they will drown themselves in nostalgia.

By the time drummer Richard Dworkin comes in, Chilton’s already onto Bossa Nova with “The Girl from Ipanema.” It is safe to say there is a variety of songs here: from Beach Boys to Johnny Cash. And the performances aren’t perfect, by any measure; see “Case of You,” during which Chilton forgets the song and moves on. The songs are bare and beautiful (“Motel Blues”), fun (“Wouldn’t it be Nice”), and special, though mostly to Big Star fans. The whole set is a gem in that sense, and while those who’ve never heard of Big Star (and we were one of those unfortunates, once) might simply pass this by with no further thought, do consider this release after you pick up their brilliant first album. And about his search for a perfect folk song, “If I Had a Hammer” is as perfect a way to end the night. We think you’ll enjoy the improv on the lyrics in that one.

Recommended for Big Star fans. We suspect the rest of the world won’t quite fall into this release, but as we do enjoy their albums, and therefore must MUST recommend it.

A four-song sampler on Soundcloud for you!