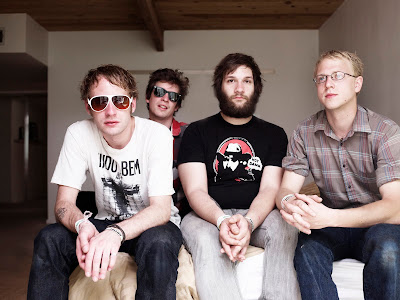 So you don’t have tickets to the sold-out Newport Folk Festival. But you still want to contribute/ party out. Well, here’s your lucky chance.
These guys (see Deer Tick, above) are rocking out at our friends’ joint, a little place we like to call the Newport Blues Cafe. They’re pretty crazy (so much so it kinda irks us, but what the heck) and damn, do we love their albums. Anyway, entry is $10, and the proceeds go to the nonprofit organizer of the Newport Folk Fest. They be jammin’ tonight (which is of little help, we know), but also Saturday night, before Mr. McCauley hits up the NFF itself as part of indie country group Middle Brother the next day. They’re still probably rocking out through the morning as we speak, and will be on the stage 10:30 tomorrow night. Be sure to pay a visit, because Deer Tick is every bit as raucous and crazy as that homeless guy who drinks from a bag and tells you about the flying Jupiter aliens. Except their singing is good. (We aren’t saying that because they’re RI’ers.)
Peace out! See you this weekend!
-Mgmt