By: MadMattKeefer
In: Brown Bird, Interviews
With: 0 Comments 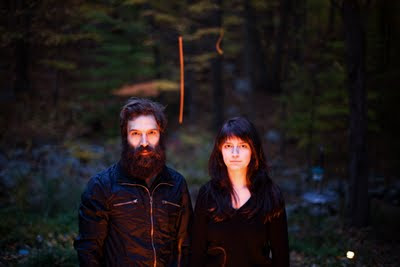 For a little Rhode Island pair, Brown Bird is doing well. Having opened for fellow Providence Americana band The Low Anthem, Connecticut’s 26 year-old MorganEve Swain (left – just kidding!) and the 33 year-old Illinois native David Lamb (actual left) are, as they say, in it to win it. As part of Sunday’s lineup at the Newport Folk Festival (www.newportfolkfest.net – sorry, tickets are sold out!), the gritty, down-the-river folk duo will display their chops in anticipation of their new album, October’s “Salt for Salt,” on the Harbor Stage. But, if you’re really dying for a sense of Lamb’s emotive vocals (and Swain’s great backing), here’s a link to their satisfying EP and a spoiler off the new album here. We scheduled for a Sunday (that happened to be Father’s Day), but Swain was gracious enough to give the gritty on Lamb’s rather paternal (but mostly feral) beard. (Photo by Mikael Kennedy.)

MK: I got your email. So who were the other bands you were jamming with on Father’s Day?
MorganEve: When I was fifteen, I joined two different bands that were made up of basically the same group of people. They were all in their 40s and 50s, playing kinda Irish music, but mostly Grateful Dead and The Band covers. I’ve been with them for almost ten years… it’s been three or four years since I’ve seen them.

MK: One of my questions was going to be how you two got into the real folk genre. I suppose Irish folk music isn’t too far a jump from that.
ME: Yeah. That’s true. For me, it’s just the music that I’ve always loved. I mean Dave grew up – well, in his parent’s church for a long time, so he really loved old gospel music and stuff like that. And then his first instrument was the drums, and he loved rock music. That was his first experience performing: playing in rock bands.

MK: What bands do you enjoy listening to?
ME: Right now, I’m listening to Them Crooked Vultures. We love Queens of the Stone Age. We love a lot of the heavier stuff. But we also listen to a lot of gypsy music, Romanian music, the Harry Smith Anthology of Folk Music. I don’t know if you’re familiar with that.

MK: Not really. What kind of Romanian music?
ME: We have several collections of Romanian/Ukrainian music that, I don’t even know what the bands are, but they’re really really great… A lot of violin, a lot of accordion, just really really soulful folk music.

MK: It’s hard getting in touch with you guys. I’m guessing you keep 9-5s?
ME: Yeah, we have day jobs right now, but we’re quitting them in September. We’re going to be touring full time.

MK: Tell me a little bit about “Sound of Ghosts.”
ME: Alright. We just released it in May. It was recorded over the Spring. It’s four songs, and two of them I believe will be on our full-length in the Fall.

MK: Hints? Any particular two? Or are we just going to have to hang tight?
ME: I can tell you, if I remember what the songs are. One of them is Cast No Shadow, and Bilgewater is the other one.

MK: Awesome. I definitely love Bilgewater a lot.
ME: Thank you. Yeah, we love that one, too. It’s our first release as a two-piece. It’s also the first release where I’m playing upright [bass].

MK: Really? What instrument did you grow up on?
ME: Violin was my original instrument, which I happen to still play. I picked up cello a few years ago, and the bass a year ago.

MK: So two of the songs on the EP will be on the full-length; can you tell us anything more about your upcoming album? Can you sing a riff off of it?
ME: Can I what?

MK: Maybe I shouldn’t ask you because you’re driving, and I don’t want you to crash.
ME: I won’t crash. What can I tell you about the LP? I don’t know. I mean, we’re really excited about it. There’s a couple of heavier songs that we cheerfully call our “metal songs.” My brother is guest appearing on violin on one of those songs. He used to be in a band called Zox, he toured with them for almost ten years. It’s been a while since he’s done anything, so we’re excited to have him on it [chuckles].

MK: So it’s going to be acoustic? No heavy synth or electric bass twanging on it?
ME: No! It is a little more rocking than our past stuff, though. It’s still acoustic, but there’s some overdrive on Dave’s guitar.

MK: So your brother plays violin. Did you come from a musical family?
ME: My dad played drums in a bunch of bands when he was younger. We’re all musically inclined. I have a cousin who played in a hard rock band. Hardcore band, I mean. We’re all musical.

MK: So I take it your cousin shows up with spiked hair, and you just shake your head and say “why?”
ME: Yes. Pretty much.

MK: My younger brother was in a ska band, and I think that’s the only natural response to it. This coming from a jazz person, though.
ME: Yeah. It’s not my thing, but my cousin’s a really awesome drummer, so it’s pretty fun to watch, anyway. The double-bass drum pedal and stuff.

MK: Out of this year’s Newport Folk Festival lineup, is there anyone you’re hoping to jam with?
ME: Umm, yeah, I mean, everyone? That would be awesome with Gogol Bordello, I love them, and I know they’re doing an acoustic set. Emmylou Harris. And our friends The Devil Makes Three are playing – we just toured with them in April – they’re playing a different day than us, but know knows. Maybe we can hop up on the stage with them. Or they can hop up with us.

MK: So basically you’re going to try to jump up onto every stage that you possibly can.
ME: Yeah. I’m just going to walk around with my instruments and just guerrilla attack people and say “I’m part of your band now. Shut up!”

MK: There’s going to be a ton of media coverage there, so you probably don’t want to make too much of an ass of yourself while you’re doing it.
ME: That’s true. Maybe I won’t do that.

MK: I have another really important question, and unfortunately I believe David isn’t around to answer it.
ME: No.

MK: His beard is pretty fierce, I’d say, and that’s a polite way of putting it. I wonder if you know who inspired it.
ME: I think it’s just natural. There’s no way around it.

MK: I definitely couldn’t grow something like that. It’s definitely more than [My Morning Jacket’s] Jim James, and probably a little more than [Iron and Wine’s] Sam Beam. It just seems like the kind of task that you do need a muse or some inspiration for.
ME: Yeah, I don’t think that he would name anyone. I do know that he has an uncle who won a beard contest once, a long time ago.

MK: Are you making this up to mess with me?
ME: It’s true.

MK: So what kind of things do you do to win a a beard competition? Put oils in it or something? I guess I just don’t get the concept of it.
ME: I’m pretty sure it was judged by amount of hair per square inch.

MK: Oh just total mass. So he didn’t have to put bows in it to win or anything.
ME: No, not that I’m aware of.

MK: I’d mentioned Iron and Wine in a beard instance, and wanted to know if, like the band, you’d consider going from acoustic to electric at some point in the future?
ME: Dave keeps talking about wanting to play electric guitar, and that’s probably going to happen in the very near future. I’ll probably keep my instruments acoustic for Brown Bird, but we’d also talk about doing a side project that would be a lot heavier, maybe get my brother on board. We’ll see what happens.

MK: Oh yeah, one last question: where did David come up with the band name?
ME: He used to have a dog named Bird, who was brown.

MK: Oh, that’s actually kind of random.
ME: Yeah. It is. It’s random and kinda sweet.