“Initiate” doesn’t start you up 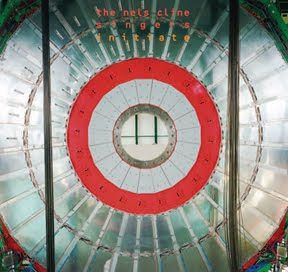 As the lead guitarist for Wilco, there’s the fear that some of the former’s style and sensibility might rub off and assimilate Nels Cline’s offshoot. Unfortunately, that is not the case here: Cline successfully breaks off from the Wilco tag with a 110% focus on extended jams and solos, making for the ultimate jam-fan album. Potentially. But “Initiate” often falls into those lukewarm, eccentric and nonsensical guitar mashings that produce less structure and more noodling, moreso than you can shake a Trey Anastasio at; “Floored,” the opener on the studio side of this double album, hits all kinds of angles except the right ones, and leaves a feeling of bewilderment and egotism. A few tracks fall into place, “You Noticed” for feeling like a celestial Weather Report, and “Blues, Too,” which could be a good Russel Malone piece. But for a double album, much of its time is spent on partially constructed moods and do-no-wrong, guitar-god posturing, rather than on creating full, lush musical thoughts that someone other than the bandleader might enjoy. Try it if you’re desperate for spacy, go-nowhere solos, but otherwise, just pass.