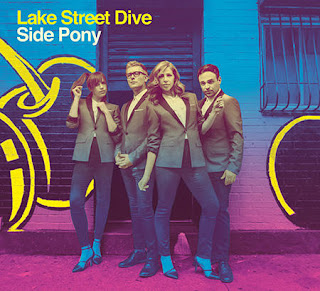 The jazzy, poppy, indescribably fun quartet hailing originally from Boston (now NYC) comes out with their fifth studio full-length. (We’ll note: their first two are exceptionally hard to find in physical copies.) Coming off their 2014 Bad Self Portraits, which we marked as one of two Top Albums of 2014, we can only admit our HUGE admiration for these young and fresh guys and gals. We have caught them live on multiple occasions, and yes, that 3.5/5 you see up there, it’s a mark of love and, really, respect toward the band. Let us explain why.

Side Pony is by no means a mixed bag. All the songs here hit a certain threshold of songwriting and craft. That said, let’s start with the weakest: the opener “Godawful Things” comes off a little cynical, decrying “Thank you to the Lord / For those Godawful things / that brought you back to me.” We think the intent here was to be cheeky and smarmy, but the lyrics don’t quite come off that way. “Spectacular Failure” suffers a similar kind of fate, describing the story of a poor guy who doesn’t get the girl, and actually feels unfairly mean. Both tracks lyrically are fairly one-sided in their story-telling, and don’t open up to any challenge in the narration. The lyrics are flat, quite frankly (even though we love “Spectacular Failure’s” chorus). But moving on, the lead single “Call off Your Dogs” is everything we love to see in a growing band: a total shift in their style (from jazz-pop-amalgum to 80s bouncing pop) while embracing their joyous spirit even more. The title track is exceptionally fun, a girly, bubblegum pop anthem that exclaims “I rock a side pony.” Both tracks, and others, are just so contagious that we declare a public groove emergency here. Please be warned: you will be singing along, whether you have sported a side pony or not (we haven’t… yet). Again, coming off Bad Self Portraits, which you have to listen to, Side Pony doesn’t hit that remarkable threshold, but is in no way a disappointment.

Side Pony darts in a different musical direction, while clearly grounded in their sense of playfulness. Recommended.