Low hit a new high on The Invisible Way 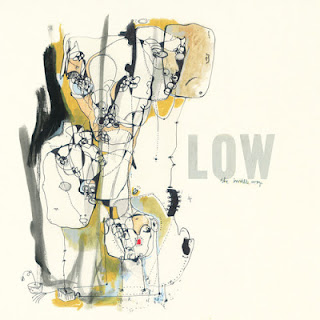 The Duluth, MN trio has been around twenty years; and on this, their tenth album, it’s easy to assume some sort of dulling in their craft. How often does a band keep itself around for two decades and keep itself fresh? While we cannot speak the whole of Low’s discography, The Invisible Way, their latest release, is a slow, melancholy, mature album, aged like a glass of wine. It lets on like a funeral dirge with moments of bare sunlight shining through; it passes like a sad man on the streets, quiet and memorable. It is, in short, a great album, regardless of where Low may be at in their career, it is written for the contemplative, for those who think being sad is not necessarily a bad thing.

Producer Jeff Tweedy, of Wilco fame, seems to have a strong hand in the album: the sound is pared very sparsely, drums, piano, vocals all used only for the strongest emotional impact. It’s simple, it’s efficient, it’s focused, in some ways brilliant and uplifting. One of our favorites, “Plastic Cup,” is one of those songs written so brilliantly that we cannot get over it: the story of sobering up and taking drug tests (hence “plastic cup”), it’s the perfect opening to a sober and complex album. Next on our list is “Just Make It Stop,” one of the peppier tracks (relatively speaking) that is so addictive we’re afraid to call it poppy. It’s just too… too… low for that! These are the two tracks that shine above all the others, and out of the eleven, we’re just not enthused about “Waiting” and “Amethyst,” one which feels a bit incomplete, and the other which just about really is a funeral dirge. But the album on the whole is produced, of course, in high fashion: it’s clean, it’s crisp, it’s gorgeous at moments. It’s the only album appropriate to play on a cloudy, miserable kind of day, and it’s got that moody kind of charm that lifts you up from it.

We haven’t spent enough time on Tweedy, so let’s just mention Low’s songs here seem strongly influenced by “One Sunday Morning” off of Wilco’s latest album. All these tracks have that clean attack, that directness, that beauty in their simplicity that we greatly appreciate because it’s so rare to get it done right. Congratulations here, lady and gentlemen; highly recommended.

Come listen to “Just Make It Stop” on soundcloud.