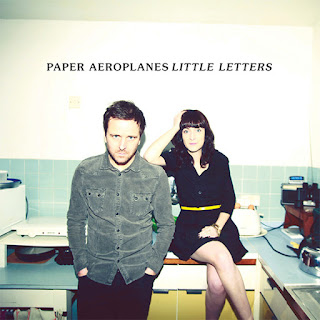 We think the main thing keeping us from falling in love with Welsh duo Paper Aeroplanes’ sophomore full-length is that it just doesn’t come off all that new to us. We love the vocals here, and lead singer Sarah Howells certainly knows how to endow emotion into lyrics, but we have issue with the somewhat placid songwriting here. The storytelling isn’t exceptional, and the melodies here are pretty, but also a bit ordinary. These are all the same songs you’d expect from a nicer Jenny Lewis or [insert girl band here]-styled album.

“Little Letters is the lead single, of course, and it’s the most original song of the bunch. It’s got a beautiful slow build which matches perfectly with Howells’ deft and pretty vocals, and is just a stunner. Other tracks such as “Red Rover” are pretty, too, and each one makes it clear this album is just a reason to treat oneself to Howells’ singing. And as much as we’re having trouble coming up with a track that we really don’t like, we’re also having trouble coming up with a reason to get this album. The vocals aren’t extraordinary enough (see Neko Case) or the songwriting strange enough (Cat Power) or the stories memorable enough (Jenny Lewis, “Acid Tongue”) that we’re going to tell you to rush out and buy this album right away. It’s good, and it’s nice to listen to, but we’re expecting the band to come into a fuller understanding of song-craft in a couple more albums.

It’s pleasant, and there are good performances, but we have to hold it to the “Should I spend $10 on this” test, and it comes up short by half. When we get an album, we expect it to bring something new to our collection, and this album just doesn’t. Take an unfortunate pass.