Portugal. The Man reaches heights on In the Mountain, In the Cloud 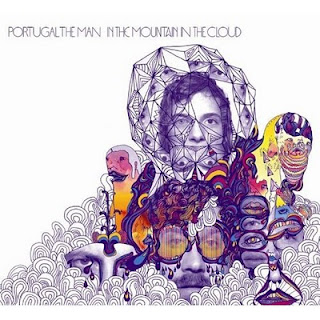 We’re big fans of Portland, OR’s P.TM. Remember the sweet hooks and 60’s choruses of 2009’s The Satanic Satanist? Thankfully, they’re back for In the Mountain, In the Cloud. Their sixth album in as many years (yes, it’s a crazy number of releases) returns the rock/pop band to what we feel is their true element: polished, straightforward psychedelia replete with harmonies, highs and lows, and strange-ass lyrics. While we feel lyrically this album is a shade off of par with Satanist, fans of Portugal will find them musically in high form, especially on that smashin’ side B. Their greatest strength lies in their ability to craft songs that newcomers can get right into; there’re no ‘figure out what’s going on’ spins when it comes to the former Wasillans. This is the kind of music that makes you want to drive around and pretend it’s still summer. Try out “Once was One,” or just about anything on the second half of the album, as the first half gears up towards it. Now sit back and enjoy; recommended.

Stream the album from their site! Sweet!