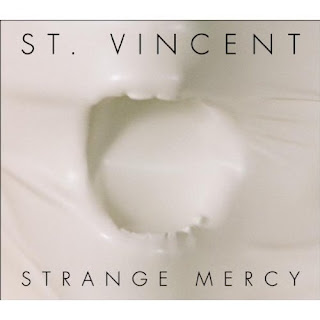 We’re not going to say that “Strange Mercy” is a whole step up from 2009’s “Actor.” We’re also not going to say St. Vincent is a modern female Brian Eno. But what we will say is, this album rocks, in the bizarre, angular-electronic way that Annie Clark is getting known for. Add to that a pop sensibility, and you get the knock-out single “Cruel,” which, if you could comprehend the strange lyrics, would make you sing along soulfully. The heart of this album is that it doesn’t rest after that second track, and that Miss Vincent rightfully explores a warmer, more accessible (relatively speaking) sound in “Cheerleader,” “Dilettante,” all the way through to the end. Yes, you’ll still get explosions of feedback/electronica (“Northern Lights”), and it’s refreshing to hear an artist exploring poppier tracks with such an eclectic ear; that said, if you’re looking for the perfect 3-minute pop song, all bets are off here. But fans will be greatly rewarded, and those with an indie ear searching for new talent should be as well – that is, if you were running from the law for a few years and somehow avoided her previous two releases. Pick this one up. And get “Actor,” too while you’re at it.

Stream this great album at NPR. And then DL it at Amazon for four bucks!

2011-09-14
Previous Post: Disco Biscuits make for soggy, stale dance
Next Post: Portugal. The Man reaches heights on In the Mountain, In the Cloud