By: MadMattKeefer
In: Interviews, Sallie Ford - Columbus Theatre in Providence - 11-5-13
With: 0 Comments 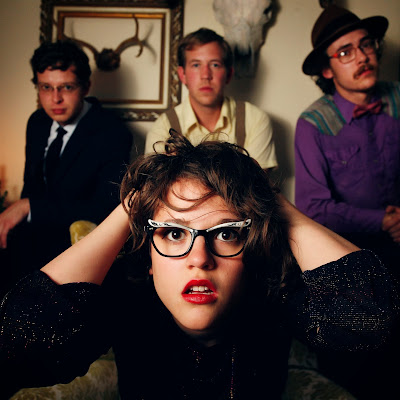 Wed. 11-5-13, Columbus Theatre, Providence, RI. Doors @ 7p. $12
Thurs. 11-6-13, Lizard Lounge, Cambridge, MA. Doors @ 8. $12-14
Fri. 11-7-13, Calvin Theatre. With Mavis Staples. Northampton, MA. Doors @ 7. $25-45
She comes like a high-flying bolt of sexual rock energy. Situated in Portland, OR, Sallie Ford and her Sound Outside hit the road for their acclaimed second album, Untamed Beast, which is a mish-mash of rock, sex, and mashed potatoes. 26-year old Asheville, NC native Ms. Ford touched base with us via email to converse with us about Savador Dali, Billie Holiday, and Britney Spears.
(L to R: Ford Tennis (29), Jeffrey Munder (25), Sallie Ford, Tyler Tornfelt (25). Photo © Liz Devine)
Ravings: What bands do you feel inform your songs? I take it some of those classic power female singers (like Ella Fitzgerald, Etta James, and Aretha Franklin)?
Sallie Ford: All sorts of bands inform my songs I suppose. On the first record, I loved jazz and blues. I listened to Billie Holiday, Cat Power, Regina Spektor and Etta James. Now I like some modern singers like PJ Harvey, Joan Jett and Blondie.
RM: Anything outside of music that informs your sound? Maybe a bit of Georgia O’Keefe, guessing from the cow skull on your cover?
SF: I watch a lot of film and television. I probably subconsciously get informed by the TV show Girls and I love me some Woody Allen films.
My fave artists are Egon Schiele, Salvador Dali and Frida Kahlo.
I don’t read as much as I should, but I love everything by Kurt Vonnegut and Haruki Murakami.
RM: What one work do you admire endlessly? And what do you learn form it?

SF: The first time I heard the record Alice by Tom Waits I felt like it was made for me. He is just so weird and proud of it and his stories are so fantastical!

RM: There’s a pretty distinctive change between this new album (Untamed Beast) and Dirty Radio. I think it’s that Dirty Radio feels a bit older, a bit more like Rock and Roll, and Untamed Beast has more of a modern-sounding rock feel. What do you think it is?
SF: I think it was the sound of us growing up and becoming better musicians. I think it’s a fuller sound and the genre is different, but genres have never been important to me. I plan to genre hop and bend and not let that hold me back. I hope to always keep a “rock n roll” sound, ’cause to me that’s an energy level and not a specific sound.
RM: I also feel that Untamed Beast is a lot more overtly sexual. What do you think caused this dramatic shift to adding lyrics about… well… “Do Me Right,” let’s say?
SF: Well, on Dirty Radio, I also wrote about sex, lie “Against the Law” and even “Poison Milk.” It was my idea from the beginning to write about things I like and relate with. Sex is especially fun to write about.
RM: Speaking of “Do Me Right,” about those first lyrics: have you ever done the Mashed Potato?
SF: Haha, I may have done the Mashed Potato, but I can’t think of what it actuall looks like. I have done a lot of swing dancing.
RM: This will likely come out of left field, but how do you draw the line between your sense of high energy and high sexuality on Untamed Beast, and that of, let’s say, Miley Cyrus. I know, not a great question, and to be quite honest, I don’t really know much about kid Cyrus other than she’s kinda off her lid. Basically Cyrus, or Britney Spears, or other young female acts charged that way – what sets you apart?
SF: I think a lot of those pop stars have more of an “image” of sexuality than I would ever want. They are more image-driven in general.
I write music that is the voice of a modern gal. Untamed Beast was the voice of my peers and I. All of the lyrics came from a very real and honest place. One of my favorite parts of music is writing. I would never want someone else to write music for me or tell me what my image was. I like to write music that’s honest and real.
I prefer Beyonce over Britney Spears and Miley Cyrus. Beyonce is proud of her sexuality, but sings a lot about being a powerful woman. I have also heard that she is her own manager and I think you can really tell by the videos she puts out that she runs the show.
RM: What kinds of games do you and the SOS play on the road? Or are you all just on your cells all the time (boring)!
SF: The boys like to play video games on their computers and I like to watch TV shows (like Seinfeld) on my computer. We have played poker together before and we drink lots of beer together.
RM: And lastly, your Public Relations guy told me your shows are intense and energetic. I caught you once at the Newport Folk Festival… but the power was out. So, on a scale of Flaming Lips (10) to Local Band’s Second Show (1), where does the SOS fall? 70s Parliament Funkadelic (11)? Old Guns ‘N Roses (7 with a felony assault)?
SF: Haha, I’d say we are anywhere from a 7-9 and 10 if we get real drunk. It all depends on the crowd for me. If there’s a crazy crowd, I’m willing to get crazy, too.
RM: Okay, really lastly: any covers you enjoy doing for shows?
SF: We do “Whole Wide World” by Wreckless Eric and “Heart of Glass” by Blondie.

Check Sallie out on Soundcloud.