By: MadMattKeefer
In: _Newport Folk Festival 2013, Live Music
With: 0 Comments

We know it’s way early to be hitting up the NFF annoucements, but we got a panicked email from their PR. It goes something like this:

“Newport Folk Festival 2013 is on its way to a complete sell out! While we could not be happier in the incredible faith shown to us by our devoted fans, something occurred to us: we did this without a lineup announcement and without a single press release.”

Ack! We weren’t prepared for musical Armageddon quite yet, and we’re struggling coming up with ways to make you look at those tickets without a lineup. Waa-waah.

But we have come up with this: 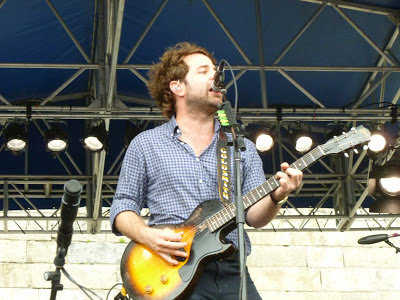 This is Taylor Goldsmith of Dawes’ fame (Sat. 2012), and he wants you to prevent forest fires, we mean, he wants you to remember all the good times we’ve had. And probably he doesn’t like forest fires, either.
We’ve been cracking this nut for a few years, and while it’s difficult to put together our topmost highlights of each year, we’ve got some that definitely crack the top five. 2012, let’s get going:

– We met up with M. Ward! He’s a very, very busy guy. Just about every second someone was talking to him, and for three of those seconds, it was us! We wanted him to sign our shirt, and he was polite without trying to run in how little time he had for shenanigans. We felt, needless to say, a bit jerkish. What the heck, though, how often do you meet M. Ward?

2011 – Johnny Corndawg made us out for a member of Trampled by Turtles. He wanted tour info. It was all the beard stuff. That made us pretty stoked. (No, we didn’t actually string him along, unfortunately).

Another one, why not. Sallie Ford signed an album for our onetime photographer, Allie Runnion. She wrote out her name, and paused for a second (cause it was spelled almost exactly the same). Kinda cute, we say.

2010 -Meeting up with Andrew Bird, who is a weird cat. Unusual. Seems like the kind of person who might prefer the company of fellow birds a bit more, but he is congenial on the phone. He, naturally, had no memory of our phone interview, though we can’t really fault a busy guy for that.

2009 – Fleet Foxes on stage. These guys are seriously bearded. While between songs, some (obviously) crazy woman yells out “I want to live in your beard!” Not that she couldn’t, but, you know, you kinda need to know someone a bit before you let them live in your beard.

2008 – We met up with Convertino and Burns and the rest of the Calexico crew, and we asked them to sign our shirt (still have it!). One of them did the right breast area, and the other, we believe Joey Burns, reflected his sig on the left. They were totally stoked about the giant, childish “CHAN” from Chan Marshall on the bottom.
(Oh yeah, remember this little article from the Mercury?)

Remember the good times we had? The lineup these past couple years has been as strong as it’s ever been, and, yes, we’re trying to sell you on a mystery package, but also yes, it has been fantastic in the past and it’s ALMOST SOLD OUT. The past couple years will attest to why that is. Check out our reviews here, it’s really a fantastic melting-pot festival, and we hope you’ll give it a looksee. Peace, love, and music,
-Mgmt.